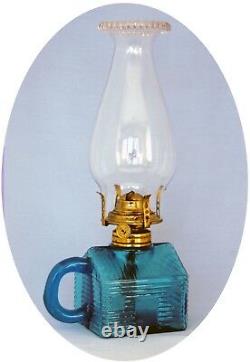 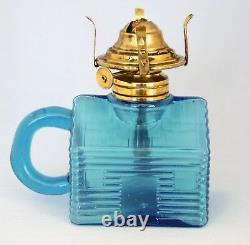 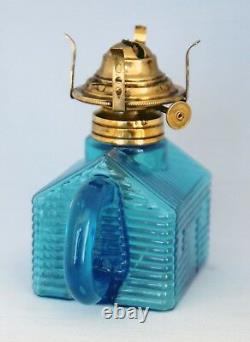 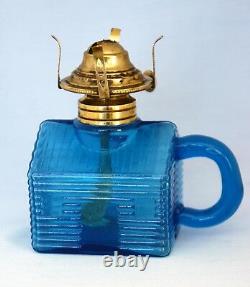 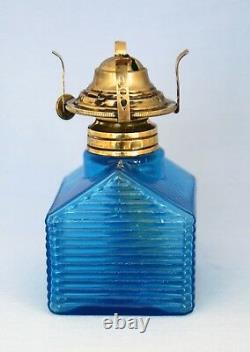 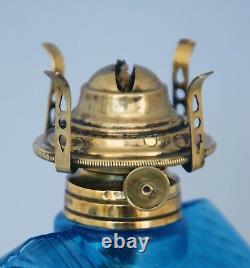 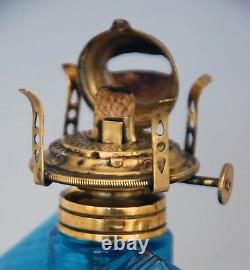 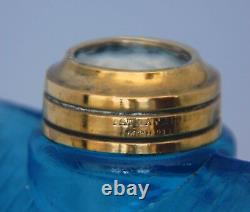 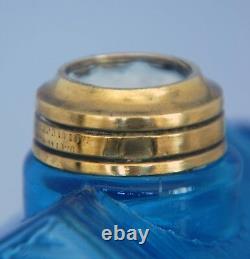 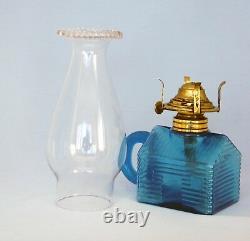 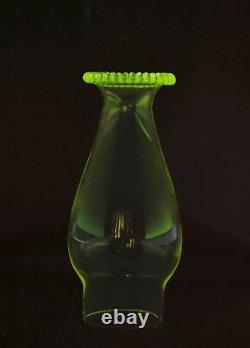 Manufactured by Atterbury & Company, Pittsburgh, Ca. Old pie-crust top chimney glows under "black light". Unmarked Prong and Hinge Burner. Some denting on collar; otherwise excellent condition. Lamp Manufactured According to 1868 Patent. On June 30, 1868, U. Patent Number 79,298 was issued to James and Thomas Atterbury of Pittsburgh, PA. The patent was for a process by which glassware with handles could be manufactured with the handles an integral part of the molding process. Prior to the Atterburys' invention, handles on glassware were applied to the article by skilled craftsmen after the article was blown or molded. Atterburys' patent described a 4-part mold (divided in half both horizontally and vertically).

A byproduct of this process was that there was an extra thick glob of glass on the inside of the font where the handle was attached. The presence of this glob of glass on the inside of the font has become a critical element in distinguishing original old Atterbury lamps from reproductions. This transparent blue glass Log Cabin lamp was made by Atterbury & Company using the process described in the patent. The company made the lamp in two different sizes (this is the smaller size; the larger one is about 3/8" taller [to top of collar] and about 1" wider [from handle edge to front of cabin]) and in several different colors of glass (clear, amber, blue, white milk glass, blue opaline, white opaline and pink opaline).

There have been reproductions of this lamp. Fortunately, it is fairly easy to distinguish the reproductions from the old authentic lamps.

The web-site of the Night Light Club at nightlightclub. Html provides a detailed description of how to tell the reproductions from the originals. The easiest method, however, is to look for or (in the case of an opaque glass lamp) feel the glob of glass on the inside behind the handle and to see that there is no "candy ribbon" flourish at the base of the handle.

A "candy ribbon" flourish is created when a glass handle is applied after the item is made. The flourish is the way the glass maker finishes off the applied handle and the reproductions all have this flourish while the originals do not.

This lamp has a dated brass "Taplin-Brown" collar which is embossed "PATD APR 13 1875 MCH 21 1876". These dates refer to two patents issued on those dates (one to George Brown and one to Alvin Taplin) relating to the process used to stamp the collars from sheet brass. The Brown patent is reproduced in the appendix to the first Smith book. According to Thuro ("Oil Lamps: The Kerosene Era in North America") these patents were assigned to the Bristol Brass & Clock Co. Thuro notes that the company probably stamped the dates on the collars for only a few years after the 1876 patent date.

This lamp also has an unmarked Prong and Hinge burner marked. The lamp comes with a clear glass "pie-crust" i. The fact that this chimney glows, or fluoresces, under "black" light (see the last photo) indicates (as explained in the note below) that the chimney itself is antique (made sometime before World War I). Condition of this lamp: This example of the Log Cabin is in fine condition with no discernible chips, cracks or other damage.

The old brass hardware on this lamp has been polished. The dated collar has no splits or cracks but is dented in a couple of spots (it looks like someone attempted to remove this collar with a pliers); see the eigth photo. The collar is firmly attached to the font. The burner is also in fine condition; the unmarked thumb wheel easily adjusts the wick that is in this lamp. As mentioned above, the lamp comes with an antique pie-crust top chimney.

The bottom edge of the chimney is fire polished. The chimney does have one unburst bubble in the glass but no flea-bites, chips or cracks.

Dating back to 1868 (just three years after the end of the Civil War) this is one of the earliest kerosene night lamps. About the Use of Words Like "Scarce" and "Rare". We realize that some eBayers, not having or knowing of a better way of assessing an item's scarcity, use these terms quite subjectively and frequently based on their own personal experience.

They simply don't know whether an item is common, scarce or rare. We take two steps to describe the scarcity of a lamp. First, we only use the words "Scarce", "Rare", "Very Rare", "Very Very Rare" and "Extremely Rare" if the item in question is judged to be so by an acknowledged outside and independent source.

For miniature lamps, we use the ratings in Marjorie Hulsebus 2006 edition of the "Price Guide for Miniature Lamps". Marjorie's ratings are also somewhat subjective (they are based on the collective view of a panel of 12 experienced miniature lamps collectors--we were members of that panel).

But were at least arrived at independently of the sale or offering of any particular lamp. We keep all of this data in an online database and make the database available free of charge to members of the Night Light Club and to others who have requested access. Fluorescence in Old Clear Glass. , found naturally as the mineral Pyrolusite, was used by by glass makers, as far back as ancient Egyptian and Roman times and up until about 1915, as a decolorizing agent in order to make clear, colorless glass. The natural material used to make glass contains iron impurities.

These impurities impart a coke-bottle green (and sometimes brown) color to the glass. Manganese dioxide, added to the molten glass mixture, neutralizes the coloring effects of the iron impurities. Adding manganese to glass has a side-effect of which we doubt old glass makers were aware.

While not itself fluorescent, manganese activates fluorescence in other elements or compounds. Clear glass which has had manganese dioxide added to it will glow with a green or yellow-green color when viewed under long wave ultra-violet ("black") light. This fluorescence turns out to be a useful test of the age of clear glass. The United States does not have large amounts of naturally occurring Pyrolusite; the mineral has to be imported from places like the Ukraine, South Africa, Brazil, Australia and China. After the outbreak of World War I in Europe, manganese became increasingly hard to get; first, it was considered a strategic war material (it is essential to iron and steel production) and, second, the normal supplies lines were disrupted by the war. And, so, after about 1915, U. Glass makers switched to other decolorizing agents e. Thus, clear glass which fluoresces (glows) under ultra-violet ("black") light can be presumed to have been made before 1915. Incidentally, manganese dioxide is also the compound responsible for the "sun-purpling" of old clear glass; when exposed to short-wave ultra-violet light (present in sun-light, or in germicidal lamps) over an extended period of time, the manganese dioxide will impart a purplish color to the glass. It has been reported that unscrupulous antique dealers especially in the Southwestern U. Would intentionally expose old glass to the intense desert sun (or to ultra-violet germicidal lamps) to create this purple color. Purists among glass collectors consider this to be a travesty and believe that intentional or artificial sun-purpling decreases, rather than enhances, the value of old glass items. Note that is can be quite challenging to get an accurate i.

That looks the same as what one sees with their eyes photograph of the fluorescence in the glass. We work hard to get a photograph that looks like what we see, but there is usually some minor discrepancy either in the exact color or amount of the fluorescence. Should you examine a fluorescent lamp under black light, in a darkened environment, it will glow, but may not look exactly like the photograph we provided. The contents of this listing are protected by U. The use of substantial portions of this listing verbatim or with only inconsequential changes without the express written consent of the authors is prohibited.

Our objective is to have happy, satisfied customers. We will work with you to satisfactorily resolve any problems. We try to answer all questions promptly.

We do our best to describe all items accurately. However, mistakes and oversights can occur. Please also note that the receiving country's Custom Service may cause delays in item's arrival. Interested in learning more about miniature lamps? Want to meet other miniature lamp collectors? Please check out our other auctions.

The item "RARE Antique Atterbury Blue Log Cabin, Miniature Oil Lamp, S1-50" is in sale since Tuesday, February 25, 2020. This item is in the category "Collectibles\Lamps, Lighting\Lamps\ Non-Electric\Miniature". The seller is "kayschwartz" and is located in Stockton, New Jersey. This item can be shipped worldwide.